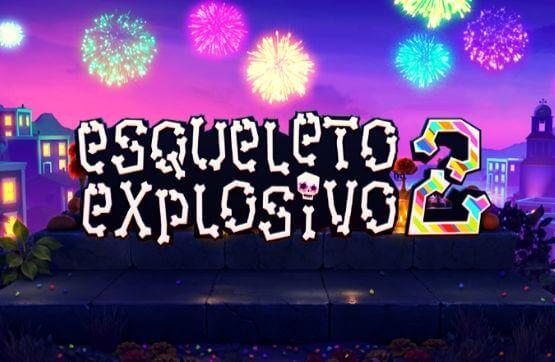 Esqueleto Explosivo 2 is an online slot by Thunderkick and an improvement of its famous original version. Thunderkick has gone to great length to retain the original familiar feel of the game, only adding a few features to make it even more exciting. The skulls are your symbols with the ‘Golden’ Elvis like skull serving as the exploding wild. It also introduces dropping Mucho Multipliers, and Free Spins with up to x64 Multipliers.

To understand how this slot works, we would first have to get an overview of its prelude, Esqueleto Explosivo. Thunderkick borrows the theme of this game from Dia de Muertos (Day of the Dead), popular celebrations in Mexico, which occurs in November and lasts for several days. During the festival, families remember their dead loved ones. Mexicans believe the spirit of their loved ones hovers around during that time. Now, you understand why the game was a smash hit, and now let’s see how its sequel measures up.

These two slots don’t use your typical spinning reels. It all happens at night, with fireworks depicting the festival mood in the courtyard, deep in the middle of Mexico. Five skeletons, each with a different musical instrument, mark your reels. Three skulls, differentiated by varying numbers of teeth, mustache, and colored patterns, lay on top of each other above each skeleton to fill the reels. When you spin, the three skulls in each reel fall off the screen as they are replaced by another set that falls into place. Each head can sing, but they only do so if you match them in a pay line. That’s Esqueleto Explosivo for you!

While the symbols are similar to those in part one, there are at least two new faces. They include blue, cyan, green, orange, and pink. There is a new purple lady skull which pays much more than the rest, five times the stake.

Another exciting improvement is that the Esqueleto Explosivo 2 has expanded paylines, up from its predecessor’s 17. You form winning combos from 3-5 symbols on adjacent reels from the first reel one. You can choose your wager amount manually or automatically from 10 p/c to 100 per spin, cranking the online slot up now to high volatility. The RTP is 96.13%, which is also slightly higher than its predecessor. Payouts, too, are up to 5,000 times your stake, way much better than its original’s 700x. We doubt if there is any better online slot that delivers a better Day of the Dead festival experience than through Esqueleto Explosivo 2.

While this is not a new thing, the slot lives to the legacy of its predecessor. The game mechanic sticks to the dropping skulls, and they cascade off the window to create room for free falling more. When you win, they explode, sometimes causing a string of more wins.

The female yellow/orange female skull with sunglasses is the explosive wild. It replaces all symbols, save for the scatter to form a winning combination. When it appears, it explodes with all the symbols adjacent to it and those it has replaced in the payline producing a female voice while at it. Also, it increases the win multiplier.

During free spins, a third Explosivo Wild adds extra free spins and deletes the lowest multiplier from the Mucho Multiplier, leaving you with high-value multipliers. The first set will remove the 1x multiplier, the second set removes the 2x, and so on. 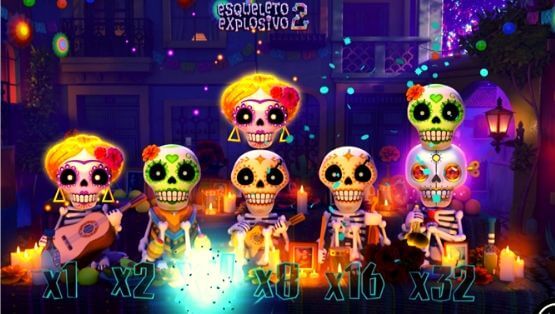 Free Spins that was missing in the first edition is now available. You have to land at least three scatters on the reels to trigger a bonus game. The high-value purple skull serves as the scatter symbol.

Here is how a different number of scatters symbols awards players during a base game:

The scatter retriggers the free spins but as follows:

Also, you get two more spins for any over five to scatter symbols on the reels. 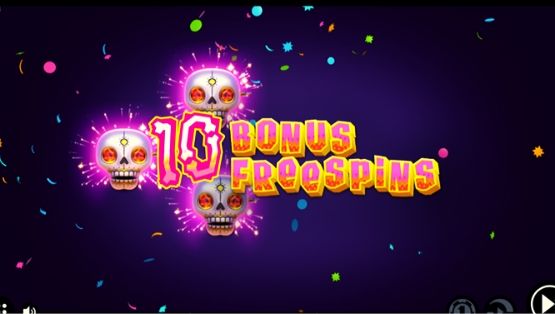 The Mucho Multiplier also increases the payouts, and it is even better with the explosive wild. It begins at x1 and doubles progressively with each spin as x1, x2, x4, up to x32 as the maximum during the base game.

During free spins, a few more ingenious elements are added, including an x64 multiplier, but which only comes into play, you have x32 as the base multiplier.

For each win on a symbol drop and or whenever one (or more) Explosivo Wild appears, the multiplier increases one level up to the maximum multiplier level. 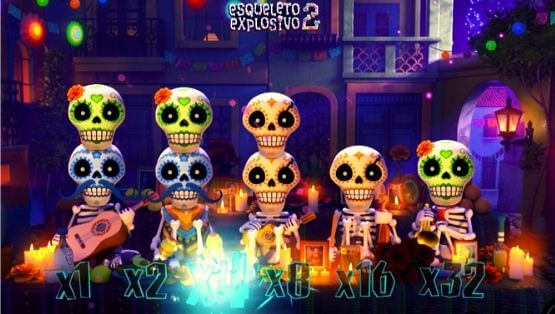 For every third Explosivo Wild that is collected in the Bonus Game, one extra free spin is awarded. We have noticed that the lowest multiplier is removed, and the next base multiplier applies.

When the meter is full, one last free spin will be awarded. 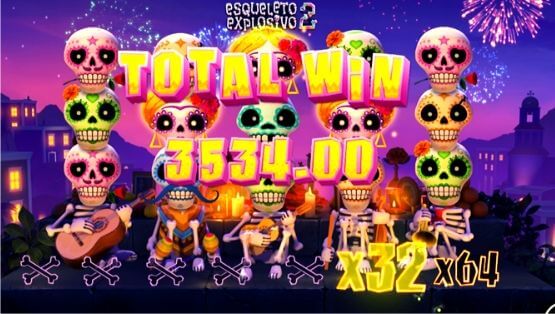 Thunderkick has kept the spirit of Esqueleto Explosivo 1 alive in this second version but has introduced significant improvements. Some of these tweaks have entirely changed the appeal of the gamblers, now targeting high rollers, as it has taken away the small and steady wins associated with its former low variance sibling. Esqueleto Explosivo 2 is a high variance slot with a great RTP and massive payout potential.

Everything that players wished they had on the first version has been included in the Esqueleto Explosive 2. From bonus rounds to swollen multipliers. And inside the free spins, you can retrigger another.

Enjoy Mariachis every time you match the symbols, a completely rumped up version of the previous game engine. You can always play the first version to be well versed with the juiced-up sequel.

Where to play The Esqueleto Explosivo 2 Slot for real