Australia’s, UK, US Casinos & Video Games Players – Which players are the best?

Blog / Australia’s, UK, US Casinos & Video Games Players – Which players are the best?

Australia is certainly playing pokies (slots as we know on the other parts of the world), and it seems like almost everyone is involved. Men and women of all ages enjoy playing casino games for a multitude of cited reasons, including “improving their thinking skills”, “improving their co-ordination”, and keeping them mentally stimulated.

There’s also the simple fact that online pokies are fun and enjoyable, and they help to pass the time. According to statistics published for 2019, online casino games are taking place across the board.

The main issue with the online casino’s in Australia is they are regulated by the Australian Government through the Interactive Gambling Act 2001. At the same time, all the advertisements in Australian media are banned by the same act 2001. Still, online sports betting is legal in Australia but regulated. As in any area of our lives when there is demand, always will exist a way to satisfy that demand, it’s also the case of online casinos in Australia.

Play At Crypto Casino
Australian casino players are still able to gamble online but at their own risk. Playing online pokies is something we must admit that Aussies loves and refusing this right is not something that they like but must comply.
In the Interactive Gambling Act 2001, the sports betting through licensed operators are legal as long the betting occurs before the sporting event starting. The reason why these types of gambling activities are legal while the online casinos not are related to the concept of “interactivity”.

But Aussies are playing all kinds of video games or online games: 68% of households play video games, and there’s good news for us women – almost half, at 47% are women. Where children are present, 98% of homes have computer games on them. However, this can become a real family affair, with 90% of adults saying that they take the time to play with their children.

How Do We Compare to the UK Video Gaming and Gambling Industry?

It’s not just video games, here. While online gambling tends to be restrictive in Australia and the Australian gamblers have to be more creatives in finding ways to play safely online casino games, the situation in the UK is much more settled and UK Gambling Commission is going a great job in creating an environment for all the UK casino players for a safe and enjoyable casino games experience.

You can play a range of online casino games for real money in the UK – in fact, figures show that online gambling is the largest gambling sector in Britain. It’s worth mentioning this upfront, as it’s highly popular.
The male and female divide when it comes to games, in general, is quite evenly split, with 48% of all UK gamers being women.

Trends are often similar, although when it comes to the facts and figures about parents playing video games with their children, there isn’t much UK data available.
However, research from Futurelab does suggest that 82% of parents have played with their children. When it comes to statistics on how many British people are playing at online casinos at least once a year, the statistics show that 17% of the UK population is playing.

How Do We Compare to the USA Video Gaming and Gambling Industry?

Like Australia and the United Kingdom, a lot of players in the US are women! However, this must come as some shock to American players, as the statistics show that although 48% of players are women, 60% of people believe that the vast majority of players are still men.

The major difference between UK and US is that in the US the most casino players are playing at brick and mortar casinos since the online casino industry is just at the beginning. Though the US players are on top of some statistic and that one is losses. 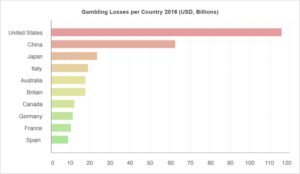 While the US, China, and Japan are leading on losses the UK players are losing money too. They lost in 2016 roughly $18bln.
When it comes to getting children involved in video games, American parents are diligent about this as well. Although fewer parents are playing video games with their children at least weekly (59% compared to 90% in Australia), this may be because more of them insist on being present when their children buy video games.
At the point of sale, 91% of parents are present to oversee the transaction, as opposed to just 57% of Australian parents.
As there is only slight variation here, perhaps this is where the tables are turned. Australian parents are less likely to be present with their children, but only because they’re more likely to see what’s being played when the games are on.
Online gambling in the USA is growing year-on-year, too, with figures from SuperData Research showing that trends are being bucked in this area as well. 57% of online gamblers were female, although not all played for real money. They tend to be young, too, with over 40% aged between 21 and 34.

What Can We Learn From These Numbers?

As Australians, leisure activities (online gambling) don’t seem so drastically dissimilar to British or the US people. And, despite stereotypes, women are almost as likely to enjoy various kinds of games as men.
When it comes to children’s and video games industry, many different nationalities recognize the benefits of gaming for children. But we can see in the stats that a lot of parents realize they have a responsibility to ensure their kids are only playing age-appropriate games, and in doing so, are encouraging responsible gaming.
And, when it comes to online gambling, Australia is busy in the land casinos playing mostly pokies (slots) and sports betting. But this industry is alive and well in the USA and UK, and will only keep growing.
The US is leading in the Gambling industry with a $261 billion value and the UK coming right after with £14.4 billion. Aussies are following with $18 billion a year.